The battle against PLC/sunpanel noise.

Due to the increase of sunpanels and PLC devices, the HF radio spectrum is more and more polluted. Add to it that in NL there is certain group of sunpanel "pioneers" who consider themselves capable of installing these devices by themselves.

In most cases they are not aware of the risk of generating clouds of noise up to high in the radio spectrum.

In my habitat the "next house" is a "next house". Best distance I can manage is just 5 meters. On both sides I have  2 neighbours  with sunpanels operational. One is installed "professionally" the other opted for the DIY kit. The picture shows the QRM of the DIY during the day. Murphy's law... It is 10khz broad and manifests itself exactly ON 475kHz there!

HF is isn't good either. The S-meter starts at S3! This more caused by PLC devices.
Bottomline is that you can't execute this hobby because you have to spent much time to correct your neigbours green philosophy.  Advantage is that sunpanels die after sunset. PLC = 24/7!

On a Dutch hamradio forum I found a suggestion of PA0FRI to use a 5m CB antenna modified with radials and balun, based on the Windom principle. The arrangement could be used as from 20m towards 6m. He suggested to tune it in the shack with a small tuner. The feeder (50 ohm coax) should be an electrical multiple of a half wave. He advised to use RG213 or RG58 with length 6,8m or multiples thereoff. This lengthe should refect the impedance of the antenna to to other end.
Regarding the tuning via the coax, he referred to  Prof Mike Underhill, G3LHZ who suggested to use a PMU (Pre Match Unit) to lower the impedances to a more manageable value before transport via 50 Ohm coax cable. On the transceiver end you can just make the final adjustment. This is can be a simple L/C combination.
If you want to go more deeply on this, suggest to digest the following Link to: ON9CVD - Preloaded Antenna Matching .

Decided to do a test. In order not to go on to roof every time I arranged a vertical dipole Windom version (6,78m -  balun 1:4 - 3,38m) in front of my house. From rooftop slooping down into the garden. It appeared that "noise" was considerable less than the 2x 10m balanced fed horizontal dipole. It was tuneable down to 80m, however the efficiency will be considerable less. Best is not to use it for transmitting below 30m. At the moment of testing 10m was quite active and the difference between the horizontal dipole and vertical Windom was astonishing in respect of signal/noise.
BTW I used FT140-43 ferrite core with standard 1:4 winding. Google gives you plenty details.

I bought a new CB antenna (5.5m) removed the coil and placed on the the roof, with 1:4 balun. Radials were extended towards 3,5m. Reason: later in the discussion PA0FRI suggested not to use a 1/4 wave radial length in order to avoid pickup QRM from the house itself. This extension will uplift the impedance somewhat, but because of the radials are now more in a horizontal plane this will balance out the results with the dipole version.  This addition made for 17m a half wave. 17m is more or less my favourite HF band.
In the shack it appeared that the SWR was surprisingly flat 1:2 within a range of 14 to 28MHz. Cable was somewhat shorter (I had a 11,5m cable ready available) Of course the cable length will influence the SWR. In this field you can do some experimentation. You could even decide to tune the antenna with several length of coax cable. (Try with additional  3,4m and 1,6m single or combination of both)
Don't forget to provide the coax cable with ferrite clamps near the balun and one extra 2,5m away to avoid a "hot" cable. This will reduce the noise considerable. 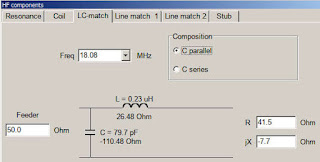 In order to determine the L values for the tuner, I I measured the Z and jX with an antenna analyser. Put those numbers in MMANA (Tools>HF Components) and note the L/C values to correct it for 50 Ohm.  I made this for  14/18/21/24/28 MHz. With a switch I selected the approriate L (in some cases you can use the same L on other bands) The C is 20-480pF type. If necessary you can make a switch for the C to switch to the other end of the coil.
You can invest "in shack auto tuner" like MAT or LDG types.

Now back to MF! 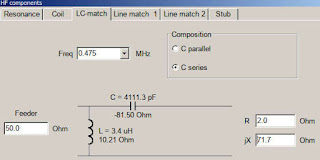 Having the fun of lower noise on HF I tried this trick on MF for receiving. Well that's someting different but with a remarkable result.
R = 2 Ohm, jX 71,7
With this contraption I came with following results for matching: C=4,1nF L= 3,4uH. 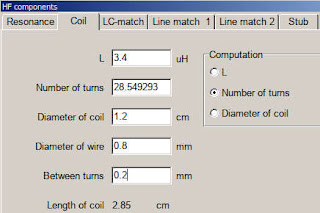 The coil can be wound with an other tool inMMANA. I used 12mm diam 30 turns 0,8mm. An LC meter will be usefull. If correctly you will enjoy an increase of MF signals around 475kHz which is rather broad. If you have a "waterfall" receiver you can see the (small)  noise bulb.

The results... Normally I listened on the T antenna which was tuned against "earth".  This included all man-made QRM. The start of the S-meter is in the region of S-8. Nevertheless signals were quite strong. 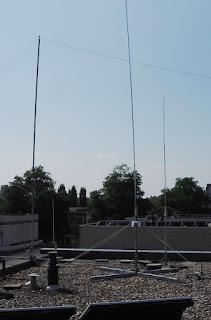 With this antenna (CB antenna with radials and balun) the S-meter dropped down to S-1 and with strong signals (like PA0LSB nearby) S-meter reading came to S-8 max. More noticeable were the reception of overseas US stations and remarkable LU2DOW came in. WSPR now received stations deeper than -30dB. In other words the S/N has improved!
The arrangement is rather broadband and could be used to listen  on MF and lower HF without tuning!

The picture shows the crappy antenna environment. In front the sunpanels of the DIY neighbour, full size the CB vertical antenna with balun and radials. On the back 2m colineair antenna and a part of the 2x 10m T antenna. The latter must be disengaged when you want the profit of the low noise reception. Otherwise it will couple the "ground noise" in to the "noise reducing" antenna.
Remember this blog is called: "630m Limited Edition!"
It took some relais switching to insert the receiving antenna for MF.  In my case they are only e few meters away from each other. I made this possible to have a 5A reed switch relay in the earth lead of the MF ATU which only energize when the TX is "keyed". 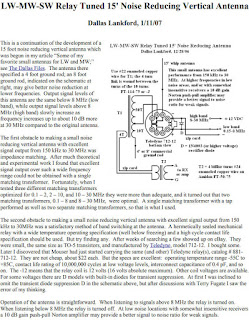 Further reading on this "noise reducing" subject, I suggest to look for Dallas Lankford files 1/11/07. They are quite hidden on the internet but I if you can't  locate them a "screenshot" of "LW-MW-SW Relay Tuned 15' Noise Reducing Vertical Antenna" is next to this text.. The only difference is that the balun used has a "heavier" transformation and he is using a balanced (zip cord 200 Ohm!) feeder. And also an extra separation transformer at the receivers end.
Because I use this CB modified antenna also for transmitting on HF this isn't option for me yet, the experiment with the vertical Windom in front of my house is still available to test that out. Disadvantage is that the antenna is in a "shadow" of the house, missing out 180 degrees....

The earlier MF antenna (the 56m zig zag Radio Veronica style) has been removed. The contraption was to heavy. With some radation resistance looses I decide to stay with the 2x 10m T-antenna.