Back to basic... The Marconi antenna

One of the nice side effects of working on 630m, is the aim to make use of your transmitter power in a most efficient way. Especially when the antenna footprint is small. The main principle on this band is to get as much copper as high as possible. In NL the antenna height is restricted. It's 5m above the rooftop. If you want to go higher a permit of the local authorities should be obtained. Well I opted not to apply for "higher" for several reasons.

My first steps on MF were made a G5RV antenna, a single wire spanning over the house. The feeder was joined together and tuned as T-antenna against the waterworks. This wil work, but not for everyone. I use the houseprobe as "earth" and lucky enough this seemed to be a very good one for MF.
A long list a several antenna variations followed.
It's clear that when you fatten the top the efficiency will increase.
Now I came back to basic... The Marconi T-antenna, however a variation of it. 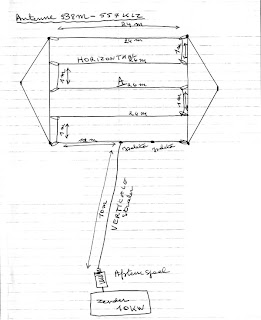 I was inspired by the Dutch offshore radio station Radio Veronica, running 10kW on 557kHz. In the 70's I happen to be on board a vessel crossing the Pacific.
Satcom was not common in those days and traffic was cleared by HF. Best time was around 1600-2000 UTC from that location to work EU. Time difference forced me to do this very early in the morning, just before sunrise.
After finishing traffic a had a chat with the 1st mate, having a Grundig YachtBoy in the bridgeporthole producing quite good music.  The stationcall revealed that it was Radio Veronica... I went back to the radioroom and tuned the main aerial to the Veronica's frequency this was done with tuner of the aux MF (500kHz) tx. The 1st mate was very pleased the portable could now used also in his cabin. This event repeated itself for some days, until we sailed out of this propagation "tunnel".

The antenna Veronica used, was relative very small. It's design came from a Belgium antenna expert. A meandered T-antenna.
Have look at the website of Radio Veronica. It's in Dutch, apart from a lot of nostalgia, it contains technical information. Seawater was certainly in their advantage, nevertheless a remarkable job covering the Netherlands with only 10kW.

I  tried to arranged something similar, only not with 4 but with 3 wires and the length, only 7,5m.
I can extend this to my backyard, but constructionwise I have my limitations.

The transmitter and tuner is on the 3rd floor. A "fat" earthcable is run from the tuner to the houseprobe. From the tuner the antenna wire is run 12m into the backyard picked up by a pole at about 8m. Than 2m straight upwards.
This 2m spacing is necessary to avoid de-tuning during "windy" periods.
The wire returns to the house and picked up by a pole about 5m above the roof. From there 7,5m straight to the front of the house. Also picked up by a 5m pole. On both poles there is horizontal alu pipe of 60cm, just 20cm below the upper wire. The wire is going back and forth between those poles. If you add up the total wirelength is 53,5m.
Geplaatst door Jan / pa3abk op 00:01